According to the report, 30 wind turbine manufacturers installed 104.7 gigawatts of new wind power capacity in 2021, despite continuing disruptions caused by the COVID-19 pandemic and increasing pressure from commodity price increases and logistical problems.

While turbine manufacturers delivered a record-breaking amount of wind turbines in 2021, companies have shown worsening financial results due to an ultra-competitive price environment, higher external costs and continuing bottlenecks which are preventing a faster expansion in wind energy.

According to the International Energy Agency (IEA), the world needs to around 390GW of energy from wind generation by 2030 to keep the world on track to limit warming to 1.5°C. GWEC’s Global Wind Report 2022 found installations need to quadruple by 2030 to keep the world on course to reach that target. These numbers can only be achieved with support for a market that delivers clean energy, clean jobs and carbon-free financial markets.

Ben Backwell, CEO of GWEC, said: “This new record in installations is a testimony to the key role which wind energy is playing in delivering the energy transition and protecting people and economies from high energy prices caused by fossil fuel volatility.

However, as the UN Secretary General pointed out yesterday, governments need to urgently take action to kickstart a much faster transition to renewables and remove barriers to deployment and investment, including cutting red tape and bureaucracy, fast-tracking grid investments and ensuring that markets adequately remunerate green energy instead of subsidizing fossil fuels.

“The fact that wind turbine manufacturers are struggling to make a profit does not put the world in a strong position to scale up investment and reach the right level of installations – 390GW per year – that we will need to reach by the end of this decade.”

“As the UN Secretary General pointed out, governments need to urgently take action to kick start a much faster transition to renewables and remove barriers to deployment and investment, including cutting red tape and bureaucracy, fast-tracking grid investments and ensuring that markets adequately remunerate green energy instead of subsidizing fossil fuels.”

29,234 wind turbines were installed worldwide by 30 wind turbine manufacturers in 2021, of which 18 are from Asia Pacific and 9 from Europe.

Vestas enjoyed a record year to remain the number one turbine supplier, making 17.7% of the new installations. Chinese company Goldwind followed in second with 11.8%, holding its position from 2020. Siemens Gamesa also had a record year with a 9.7% global market share, moving it up two positions to third place in 2021. China-based Envision, is fourth with 8.65% of 2021’s market. GE Renewable Energy rounds out the top five with 8.55% of the market. The upward trend in wind turbine rating and rotor diameter continues from 2020. The average rated capacity of new turbines installed in 2021 surpassed the milestone of 3,500 kW, while the rotor with the size greater than 140m accounted for more than 58% of the new installations.

This is primarily due to the wind industry having a record year in new installations for offshore wind, while larger onshore wind turbines were installed in China after its onshore wind market entered the grid-parity era from 2021. Medium-speed wind turbines continue to gain popularity, the data shows, with its global market share increasing to 9.7% in 2021, a 3.6% rise relative to 2020. Mingyang and Vestas remain the key drivers in this turbine drivetrain solution with Goldwind, the world’s number one supplier of direct drive wind turbines, and Sewind, China’s leading offshore wind turbine supplier, both installed their commercial medium-speed turbines in 2021 for the very first time.

There was a significant level of offshore wind growth in China driven by the country’s feed-in tariff cut-off. Chinese suppliers, however, dominated the offshore wind rankings last year with Siemens Gamesa and Vestas dropping out of the top 3 for the first time. 2021 also saw the volume of exported Chinese turbines nearly tripled compared with 2020, but the Chinese OEM’s market share outside China remains small. 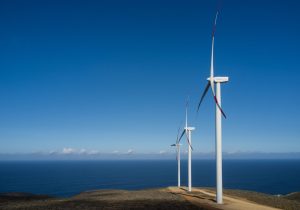 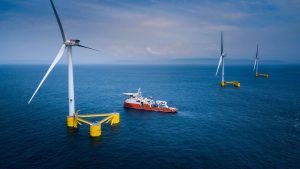