By autumn 2024, USB Type-C will become the common charging port for all mobile phones, tablets and cameras in the European Union.

EU parliament reached an agreement today that establishes a single charging solution for certain electronic devices. This law is a part of a broader EU effort to make products offered in the EU more sustainable, to reduce electronic waste, and make consumers’ lives easier.

What are the new rules for the EU single charging solution?

Under the new rules, consumers will no longer need a different charging device and cable every time they purchase a new device, and can use one single charger for all of their small and medium-sized portable electronic devices. Mobile phones, tablets, e-readers, earbuds, digital cameras, headphones and headsets, handheld videogame consoles and portable speakers that are rechargeable via a wired cable will have to be equipped with a USB Type-C port, regardless of their manufacturer.

Furthermore, the new common charger rules specify that charging speeds must also be standardized for devices that support fast charging, allowing users to charge their devices at the same speed with any compatible charger.

Within the EU, consumers will be provided with clear information on the charging characteristics of new devices, making it easier for them to see whether their existing chargers are compatible. Buyers will also be able to choose whether they want to purchase new electronic equipment with or without a charging device.

The new requirements will lead to more re-use of chargers and will help consumers save up to 250 million euro a year on unnecessary charger purchases. Disposed of and unused chargers are estimated to represent about 11,000 tons of e-waste annually.

EU Parliament’s rapporteur, Alex Agius Saliba said, “Today we have made the common charger a reality in Europe! European consumers were frustrated long with multiple chargers piling up with every new device. Now they will be able to use a single charger for all their portable electronics. We are proud that laptops, e-readers, earbuds, keyboards, computer mice, and portable navigation devices are also included in addition to smartphones, tablets, digital cameras, headphones and headsets, handheld videogame consoles and portable speakers. We have also added provisions on wireless charging being the next evolution in the charging technology and improved information and labeling for consumers”.

When will the new common charger rules go into effect? 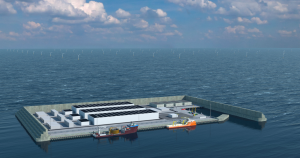 Ørsted-ATP to Partner on Digitalization Plans For Denmark Energy Island